The RJD leader and the Congress chief discussed the strategy for the 2019 Lok Sabha elections, and the steps needed to further strengthen the Mahagathbandhan in the state. They talked about various issues such as poll campaign, selection of candidates, agenda setting and failure of Prime Minister Narendra Modi-led government at the Centre.

Tejashwi and Rahul are expected to meet again in near future, reported Prabhat Khabar. 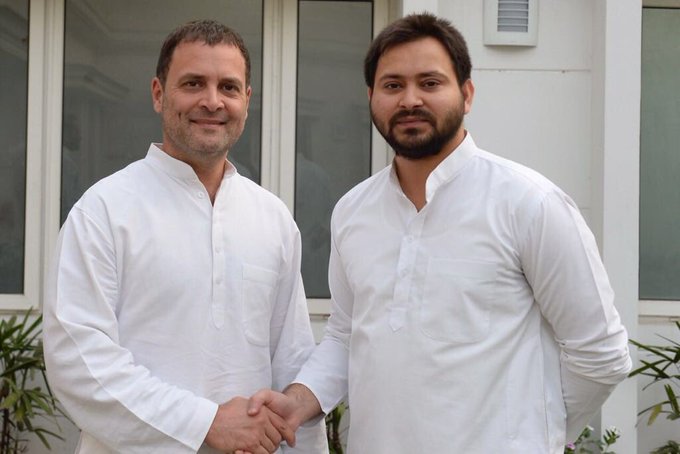 The two leaders discussed in detail the alleged failures of Modi government on key issues and non-fulfilment of promises made before 2014 Lok Sabha elections.

Terming the meeting as “fruitful”, the Yadav scion took to microblogging site Twitter, saying, “We are committed to take nation out of the climate of fear generated by this regime. Watch out! Shall come out wth a committed programme for farmers,youth,women,poor…”

He further said that the pupose of their attempts was not to form government, “but to transform the lives of downtrodden people”. Tejashwi Yadav called the Modi government a “right wing authoritarian regime”. He added that the Congress and the RJD together stood for Constitution and “social justice”.

The RJD leader tweeted, “We are here not to form govts but to transform the lives of the downtrodden people against the wishes of current right wing authoritarian regime. Our togetherness is aimed at protecting constitution,secular-democratic values & goals of Social Justice. We shall fight, we shall win.”

The meeting between Rahul Gandhi and Tejashwi Yadav came on a day when members of the National Democratic Alliance converged in Patna for a dinner. The dinner was attended by Chief Minister Nitish Kumar, Deputy Chief Minister Sushil Kumar Modi and Lok Janshakti Party (LJP) chief Ram Vilas Paswan.

If speaking against BJP makes me anti-national, I don’t mind being called one, says Mehbooba’s daughter – Times of India